Sometimes you must make the best of what you have available...

Super Armatrons rock in so many ways. 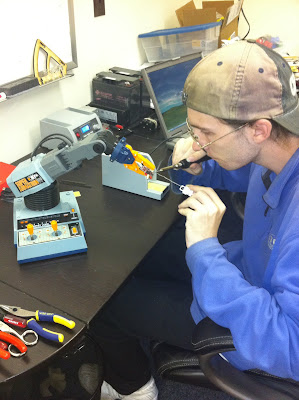 Every robot that you ever heard of normally employs some sort of individual servo mechanism for powering each joint of the robot. Not so with Armatron; There are no electronics inside at all, in fact the toy is entirely powered by a single motor. All of the toy's functions are controlled by a complex array of mechanical transmissions and gear trains. It's powered by 2 D batteries, directly connected to a power switch and a dinky brushed DC motor that looks to run around 300 RPM; it's very slow. Some clever folks have replaced the motor with a steam engine. 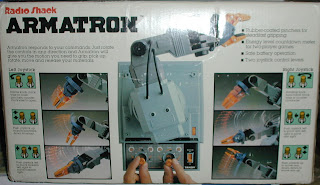 The Box, and the Manual (For posterity)

Yes, you are supposed to keep score yourself. :) 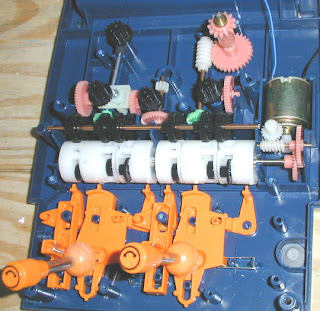 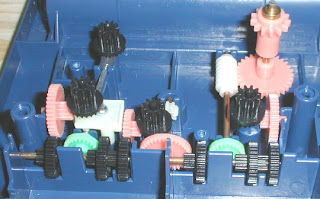 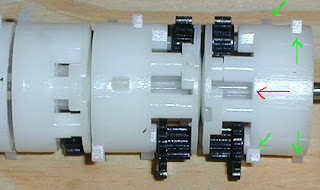 The picture above shows three of the six indexing drums. The red arrow indicates an inner gear fixed to the main drive shaft. One of the outer black gears is for high-speed operation. The other outer black gear is for low-speed operation. Friction between the gears causes the entire drum to rotate about the shaft unless the drum's position is held by one of five indexing tabs. Green arrows indicate four of the five tabs distributed around the drum. The tabs determine which of the two gears on the drum engages the forward or reverse gear. The combinations are slow-forward, fast-forward, slow-reverse and fast-reverse. The fifth index is neutral where no gears are engaged. Note how the left drum is thinner and has only one outer gear. This corresponds to the claw movements, which have only one speed in forward and reverse. 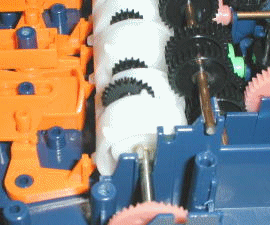 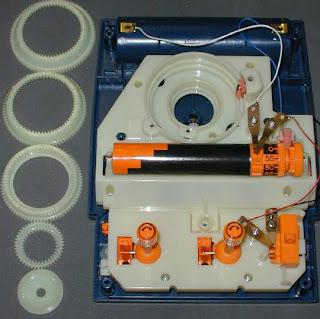 This picture shows the gear covers back in place. The arm assembly fits into the round ring gear socket. Armatron can continuously rotate through a full 360 degrees. This is made possible by the stack of ring gears. Each movement is transmitted from the base to the arm via a ring gear. The orange and back barrel is a timer mechanism that cuts power to the arm after the allotted time has expired. 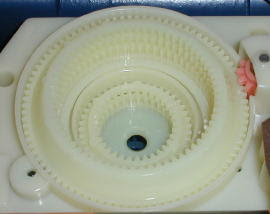 Here are all the ring gears layered back in the socket. 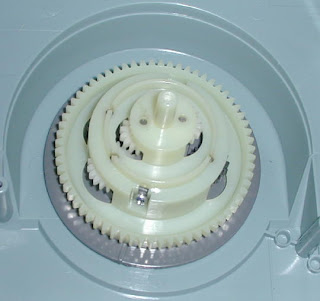 This shot shows the underside of the arm assembly that fits into the socket of ring gears.

Here's some drawings of the mechanism ripped from the patents. 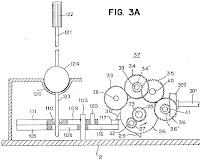 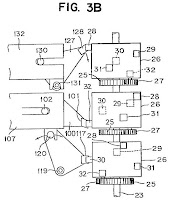 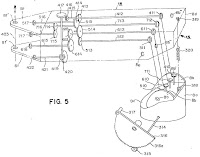 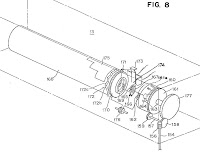